About a month ago, I wrote about making bags from old t-shirts.  I've been thinking about these bags even more lately.  For one thing, I find that they're much more portable than the canvas bags I've gotten over the years -- they aren't as stiff, so I can easily toss them in another bag, and get them out only if I need them.

But the other reason is that my sons have been casting about for ways to earn real money.  They earn mommy dollars at home, but I'm not exactly the type to throw serious money at them.  Not only am I super cheap, but I think it's important for kids to learn early on the hard work that goes into earning money in the real world.

At any rate, they're not old enough for serious jobs yet.  But I realized that they know enough about sewing (they bought several lessons from me for 10 mommy dollars a session) that they could make t-shirt bags and sell them.

We had a huge bag of t-shirts the boys have been given by friends, relatives, camps, races, etc.  We had already sorted these into 3 piles:

This last pile had about 40 t-shirts, and it became the basis for our project.  We began with a scissors party, in which the boys cut off arms and necks of about 20 t-shirts. 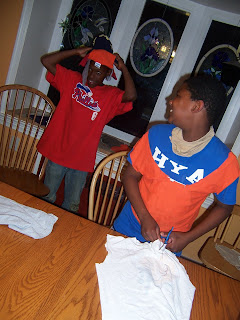 Here's my younger son working on sewing the sixth complete bag the boys made. 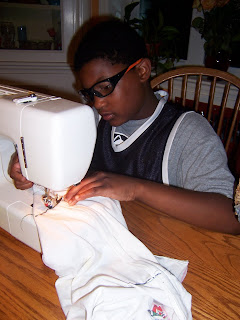 One of my good friends is part of a giant yard-sale this week.  We'll be heading out of town, but she agreed to sell the bags.  Here's the display stand we made.  The base comes from an old bar stool we finally tossed; the pole is from a push-broom.  The hooks are made of paper-clips.  The lettering was done by a friend of the family who has some art talent. 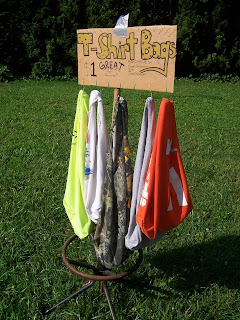 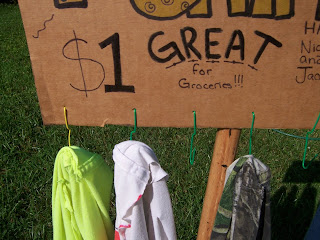