I'm leaving the trash to the side for a while to talk about electric use.  Most descriptions of how to calculate energy usage are horrendously scary to look at (even to me, and I'm a mathematician!).  They're full of decimal points and strange abbreviations.  Brr!

Here is an easy way to get started thinking about energy usage.  Don't worry about dollars and cents yet.  We'll just compare energy usage from some simple household appliances. 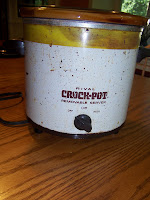 The number you want to look for is the "watt" (as in "Watt amount of energy does this thing use?").  You don't have to be an engineer to find this number, just look under your appliance for that silver tag that has the model and serial number. 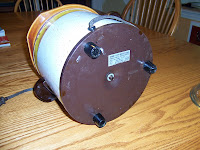 My crock pot uses 120 watts on low or 210 watts on high.   That's about the same as one or two 100-watt lightbulbs.  Just imagine trying to cook food by sticking it in an insulated box with a couple of lightbulbs -- crock pots don't use a lot of energy!    [Technically, that's 120 watts or 210 watts each hour, so about 720 watts-hours to cook something on low for 6 hours, or 630 to cook something on high for 3 hours].
How does this compare to other kinds of cooking?  My waffle iron is labelled at 1200 watts (twelve really bright lightbulbs).   I leave it on for only about 20 minutes, or 1/3 of an hour, so it uses about 400 watt-hours total. 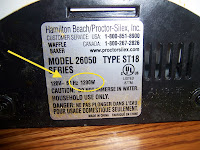 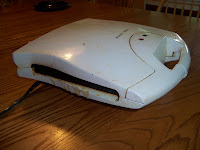 My coffee maker is 1100 watts, about the same as the waffle iron.  My oven is rated at 4.5 kW (kiloWatts), or 4500 watts.  That's the max amount it uses, when it's preheating and when the heating elements are on, so a direct comparison isn't easy -- but just the scale of the numbers suggest that waffles take less energy than muffins.
This makes a great kind of a treasure hunt -- you could even get your kids to help you.  (Actually, your kids would probably have even more fun than you do at this, so definitely include them!)  At the low end of the spectrum, 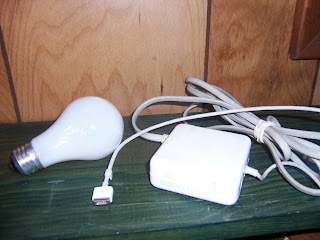 Making heat is definitely more energy-intensive than making sound.  Our dryer uses 2760 watts (that's about two-and-a-half coffee makers), at least when the heating element is on.  Sometimes the dryer just tumbles the clothes in the already-warmed air -- like the oven, it's not directly easy to calculate.  But heating that air takes a lot of work: that's why line-drying can save a lot of energy!
Where else does our energy go?  When I was growing up, refrigerators were known as the biggest energy hogs -- they're always on (although not always on max), and they move a lot of heat around.  Our refrigerator uses 540 watts at its max.   Nowadays people point to televisions and their accessories winning the energy-hog contest.  Here's what my husband's set-up looks like: 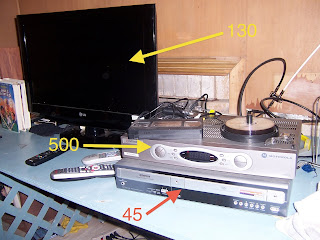 In other words, it uses more energy to watch TV than to run our fridge.  It uses as much energy to watch TV for an hour as it does to run a crock-pot all day.   That doesn't account for the energy the devices suck out while they're supposedly "off" -- that's the energy equivalent of leaving the faucet running, but almost all of us do it.  When my husband was in Iraq for a year, I unplugged the TV and its surrounding posse, and I used the dryer only once.  I still used the refrigerator, dishwasher, washing machine, and cooked a lot, but even so, our electric bill was cut in half.  Yes, that's half.
Finally, a little technical note.  If you don't see "W" on the tag, look at "A" (for "Amps"), and multiply that number by 120.  For example, my dryer says "23A"; I multiplied 23x120 = 2760 to get the watts.

Email ThisBlogThis!Share to TwitterShare to FacebookShare to Pinterest
Labels: Energy use