Stuff I got wrong and didn't know, but now I do

I kind-of enjoy uncovering my area of ignorance . . . so this post is about me doing a bunch of public uncovering about surprises I've encountered down here in Panama.

Geography mistakes win the day.  I figured, since I'm an east-coast-denizen, and Panama is in the "middle", I'd be flying west a couple of time zones.   But I keep forgetting that South America is actually east of North America, and in fact, Panama is slightly east (and quite a bit south, of course) of the Atlanta airport I flew out of.

Also, since the Atlanta is to the east of the Pacific, it would make sense that boats heading out of the Pacific through the Panama canal would go east, but instead, they zig north and slightly west.  Because Panama is mostly east-west configured.   Go figure. 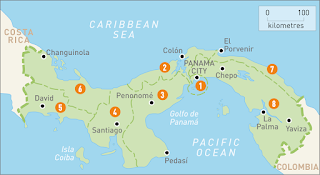 The Panama canal itself is only about 50 miles long.  ("Only"? )  It connects two oceans, so you'd figure (or I'd figure) that it'd mostly be full of salt water, but in fact it's fed by rivers and is largely sweet water.   Traffic goes one way:  east in the morning, and west at night.   And if you think the tolls you pay on the highway are high, then the canal tolls would knock your shoes off:  $100K or even $1million to pass through, depending on the size of the ship.  Whoa!

In the middle-ish of the canal, there's a fabulous mostly-preserved rain forest.   We took a boat ride to some of the tiny islands in the middle of a lake in this region.  We got to see howler monkeys far off, and capuchins, closer, and a wild "Titi" monkey ate a piece of banana off my arm.  I mean, both the monkey and the banana were on my arm.

What's a Titi monkey, you ask?  I looked this up later:  in English, it's a marmoset.  My Spanish-speaking/hearing skills are definitely getting a major workout here.  I thought the guide was telling us the monkeys were "lazy" . . . it was only later I realize the word "perezoso" also means "sloth" . . . and we got to see sloths sleeping in a basket.  That's the life, man.

And I smelled an orchid that smelled like chocolate. And saw an orchid that actually WAS a vanilla plant.  Did you know that vanilla comes from an orchid?  I didn't know!  But now I do.

I have two more days here before I fly back.  I'm definitely packing extra space in my brain on the next trip I take!