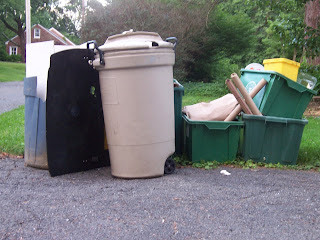 Here's a view from my curbside earlier this week:  two medium-trash cans (one for here, and one so beat up that it's "to go"), plus a side helping of four recycling bins.

It's a pretty typical picture on trash day, for most people.  But (and now here I'm going to do my little braggy thing) this is the trash result of a major (as in HUGE, top-to-bottom) clean-up of our garage.

And (more braggy stuff) we hadn't put out any trash cans at all since May.

And (even more brag-erations) is that what you see here are our fifth and sixth trash cans for the year so far -- to date, we've put out only six trash cans in the year 2015.  Yes, even with five people in the house, we're averaging about one trash can per month this year!  I'm feeling a little bit like we're really starting to get this low-trash lifestyle down right.

Where did the rest of the stuff in the garage go, then?  A lot of our cleaned-out material was stuff we're trying to get into the hands of people who can use it.   I've been using the garage as a place to store all of our "to donate" items.  When we finally got around to cleaning this out, we took a car-full of Arts and Crafts items to a non-profit on the other side of town -- it's a thrift store for craft stuff only.  I love this place; its mere existence finally convinced me that I can store my "I-might-be-able-to-use-this-someday" kinds of items "in the cloud" instead of in my own closets.  I gave away fabric paints, glass paints, fake fur, scrap books . . . all knowing full well I can go find similar items again for cheap, should I ever decide I need them.

We've been saving up books to donate to our local library book sale.  Those filled the trunk on a second car trip, while the clothes and other household items bound for Salvation Army hitched a ride by filling up the entire back seat.

I sorted through all sorts of scrap wood, including some leftover from the Elephant-Mother-Chair.  I kept only the wood I could imagine using in the near future (garden renovation projects are planned for October), and I bagged/boxed the rest up as scraps for K-daughter, who just received a fire-pit from some friends and who wants to burn something it.

Plastic bags. How the heck do we get so many plastic bags, especially in my trash-phobic household?!? I took a fully-loaded bike trailer worth of those to the grocery store to recycle.  Sheesh.  Seriously, how do these bags keep reappearing at my home?

There is a still a pile of use-able but not donate-able items (roof shingles, plastic gardening pots, sleds, and other miscellany) in one corner of the garage.  I'll bring out this entire pile for display at the next neighborhood yard sale, which will be coming up in about a month and which attracts hordes and hordes of people.  I will probably sell most of this for $0.00.   I love free boxes!

A milk crate and a cardboard box of hazardous household waste (motor oil, a can of oven cleaner, burnt out cfl lightbulbs -- some of it from cleaning out my dad's house and my ex-husband's house) will go to our local hazardous waste place later this week.   Or maybe I'll put some of it in the free pile instead -- might as well put it to use, right?

There are a few hardware items I'll eventually take to our Habitat Restore, but I don't have enough stuff to make a trip worthwhile yet.

Sweeping out the garage, I did my best to put the dirt-dirt (as opposed to styrofoam-dirt or plastic-dirt) in the compost instead of in the trash cans

Aannnnd . . . that leaves one recycling bin full of plastic bottles, three recycling bins with paper and cardboard, and two trash cans with a bunch of who-knows-what kinds of damaged goods and discarded packaging materials.