BLM: What I've been doing

The Grumpies recently posted this request/challenge:

The other thing I’d like to see more of is people posting what they’ve been doing.  It isn’t bragging.  It isn’t virtue signaling.  It is helping others to figure out what they can do and it is helping others feel like the norm is doing something rather than the norm not being doing anything.  When you’ve done something, post it in your blog.  Tweet it on your twitter account. Tell your IRL friends.  Come here and tell us about it.  When I see people doing this, *I* get more motivated because it reminds me that I’m not alone.  Every time you let people know you acted, you cause more actions.  Don’t keep it to yourself!

Since I often feel like I don't know quite the heck what to do in times like these, I very much appreciate the sentiment.  So in that vein, here's what I've been doing.
A week or so ago, I attended a downtown protest with my daughter (at her request, in fact).  We'd been hesitant to go because of pandemic, but then she saw pictures of one of her friends getting pepper sprayed, and she felt like she (a) couldn't not support her friend and (b) needed support herself, which is why she asked me to join her.  We walked downtown, serendipitously picking up a "JUSTICE" sign from a friend we happened to meet who was leaving, partly because of the pepper spray.  We didn't wade into the thick part of the crowds; we found a spot where protesters were socially distancing but still visible, and we hung out there. 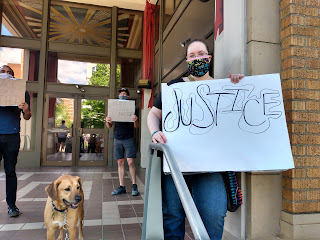 I figured my role was to be a calm, non-anxious presence.  I sat on the steps with my (uber-friendly) dog Prewash, and smiled at everyone.   I smiled at protesters, I smiled at passers-by, I smiled at the very uncomfortable-looking police officers standing across from us.   By the time we arrived, the pepper spray was gone and things were generally calming down.  There was another dude on our corner who was also going for the mellow approach; he'd brought a boom box and was playing music:  John Lennon's Imagine; Louis Armstrong's "It's a wonderful world", etc. 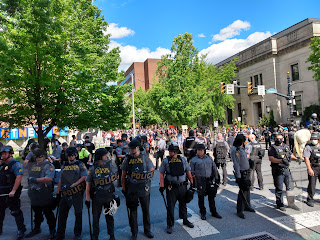 After we'd been there a half-hour or so, the main group of protestors left, and so did we.   I waved thank you to everyone as we left.   We later learned that there had been some white agitators throwing things at the police (which didn't excuse spraying the whole crowd, including children, with pepper spray, but does show that the job of a police officer looking at a crowd is a really tense and tricky one).   In the days and weeks since, my city has continued to have protests, and they've all been peaceful, in many of which the police have joined the protestors.
Since then, I've also used the time I had with my older granddaughter to construct and sew a BLACK LIVES MATTER flag for our front porch.  Now we won't need to last-minute borrow cardboard signs if we go to another downtown event. 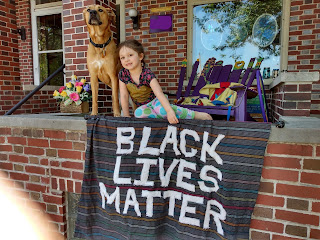 I've recently joined a book group at my College; we'll be reading White Fragility together.   I've wanted to read this book for a while, for one thing; for another thing, I love learning in community.  Getting a chance to hear how others think about this will help me think more deeply, so the book group aspect is a big deal for me.
All of this takes a bunch of space to write about, but to be honest, the main focus of my attention has been on other, less immediate aspects.   Like --- I keep sewing face masks for our local hospital, and I keep volunteering with our local soup kitchen.  I know those aren't directly related to police brutality, but they feel like an important part of supporting people who are the most vulnerable.
And, the big thing: my fall classes.  It's easy to point to something I know very little about (policing) and say "you need to change".   But to me, this moment in time says that we really all need to think about what we do and humbly think about how we ourselves could do better.  And I've been trying to think about how I do (or don't) use my own professional voice to open up access for all of my students.
My main web pages have traditionally started with "here's my math research".  Now I start with "Why I teach", and include as part of that other civil rights activists (like Bob Moses) who have used math education as a platform for economic justice.
I'm adding information in my syllabus about the importance of self-care, especially in turbulent times, and adding information about campus and other resources so that my students know these exist.
I never write to my advisees during the summer, but this summer I'm getting ready to write and just check in to see how they're doing.  I hesitated doing this because I don't know them very well (they were assigned to me), but then I realized that's all the more reason for me to take the initiative.
I'm trying to add the "implicit knowledge" information to my syllabi.   Many of my students have parents who guide them: ("get a tutor"; "'go talk to your professor").   But others of my students and their families don't know how college works, so I'm trying to be clear ("Tutoring on campus is free", "I like getting to know students one-on-one in office hours; you don't have to make appointments or to ask math questions.")   It's hard to put this together because, even after three decades of teaching (or possibly because especially after three decades of teaching), I'm not sure what assumptions my students and I don't share.
I'm formalizing a set of "math-ographies" (mathematical biographies) of cool mathematicians I know and admire, from a bunch of different backgrounds.   A few years back, in an upper-level math course, I started every class with a 3-to-5 minute introduction to one of these people.  I figured that talking about living mathematicians ("he just got married!"; "she has a cool TED-X talk!") would make this a bit more inspiring to my students, and I was right.  Also, focusing on live mathematicians makes it easier to showcase a diverse group of people.   I think I need to do this in all my classes this year, for at least two reasons: (1) because we know that these kinds of stories help students see how they can belong, and (2) because I'm likely to be on-line teaching again, and I need a way to personalize my teaching to draw students in to the math.
For similar reasons, I'm adding to my collage of office door photos, where I've been putting up pictures of former students.  Mostly, for obvious reasons, I have photos of math majors -- those are the ones I work with one-on-one.  But the majority of students I teach are in calculus; they're not majors.  And so I'm starting to add photos of students who took my math classes but are now headed to law school, art school, or the workplace.  This could be you, too; I want to say, and I care about what happens to you, even after you leave my class.
I'm also reading other people's blogs and seeing what kinds of actions they are (or aren't) taking, and trying to get good ideas.   Let's keep up the sharing, people!
So, that's what I'm doing.
Finally, here's what I'm NOT doing.  This part below is taken verbatim from an email I got from a friend of mine (who is black -- this is relevant) and who runs racial healing institutes.  She writes:

Frantic messages to people of color with half-baked ideas is very wearying.

Hold off on those projects, scholarships, concerts.

Requests that we come to speak now to your organization without you first taking an assessment of where you are and how a training fits into a larger context of justice and equity are tokenizing. If you want the expertise, pay for it.

Instead I have a few suggestions:

1. Do your work. Focus on uncovering your hidden racial bias. Build emotional resilience so that you can be with uncomfortable truths and stay present. You have a lot of work to do before initiating efforts to help people of color. If you'd like some guidance in uncovering your bias, go here.

2. Talk with other people of European descent. If you are silent or ineffective, no shame in that--but get training. Come to the preview call to find out about our Stop Being Afraid: Transform your Conversations about Racism course. Details here.

3. Look for ways to share power, wealth, access--every day. Put it on your to-do list or add a post it to your screen. Ask yourself it you did it every night.

Will you take this on? Please reply to let me know.