Are you as nervous about it as I am?  Probably not, because you're far away and don't have to hear me.  But as for me, this resolution is going to be a biggie in my life.

Earlier this fall, my college made a video of me, and I noticed my voice sounded raspy.  There was a nasty cold that infected a bunch of people this fall, and I got hit by a low-level cough that turned into a sore throat, with the whole illness lasting about two months, so that might have affected things.  But still, the raspiness, I didn't like it.  I want my voice to stay as strong as the rest of me . . . hence, time to start exercising those vocal chords. 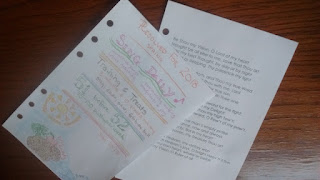 Was I imagining things?  When I told my daughters about my resolution and the reason for it, they asked, "What raspiness?"  But then after I spoke a little more, they said they could hear what I was talking about.  My husband, when I brought this up, said he'd noticed the raspiness starting a year or so ago, and that it's more noticeable in the morning.  He also said he likes my voice the way it is (love that man!).  My early-morning running buddy couldn't hear the raspiness at all.   All of these conversations were doubly comforting:  I'm not imagining things (good for my brain!), but I don't seem to have to freak out about a serious problem, either.

On the other hand, I'd tested the waters on the Sing Daily resolution, and I decided to go for it.  And not just some wimpy sing-hum-along-with-the-radio kind of thing, but a real work-those-vocal-chords-and-diaphragm kind of singing.  Every day.

The Christmas season was a great time of year to take this resolution out for a test-drive, because there are a lot of chances to sing familiar songs with a lot of other people.  But I also did a bit of solo singing, with my toe in the metaphorical lyrical waters.  Here are some big surprises I've encountered as I tried it.

I don't remember the words to songs.   This kind of floored me. I know the Gettysburg Address by heart; I've memorized about a gazillion poems; I've memorized hour-long math talks.  But I'd start a song in the confines of my office after hours, and I'd get to the second or third line and . . . nothing.  What a blow to my know-it-all psyche!

Even more, it's really hard to sing by myself if I don't know the words.  I ended up singing a lot of "Happy Birthday" and our college's Alma Mater when I was still testing the resolution out.  So now I know that part of singing daily is going to have to include memorizing the words to songs I like.  Right now I'm mastering "Be Thou My Vision" and "If I only had a Brain".  Suggestions for other good songs are welcome!

I sing so poorly it's hard to keep singing.  The feedback loop is really hard to overcome here, folks.  I open up my mouth and start singing these raspy notes, and I just want to shut up until I can sing better.  Or I don't quite hit the notes I want to hit.  Or my voice just doesn't sound like the kind of voices I like listening to when I go to theater performances or turn on the radio -- and it makes me want to hear those voices and not mine.   It's not a surprise that I sing badly; it's a surprise that it's just so danged hard for me to keep singing anyway.    I know I've got to keep going (just like, when I'm out of shape, I need to go running even though I feel like I'm a canvas bag full of ping pong balls).   And I can hear that I'm getting a bit better already --- or maybe I'm just becoming inoculated against the noise, I dunno.

A bunch of other people have raspy voices, and I like them.  Even though I am still sort of put off by the gurgle-y sound I make, I've noticed that other people talk the same way and I don't seem to mind their voices.  How did I not notice those other voices before?  I guess it's just the way we humans learn to pay attention to what we're already paying attention to (like when I was house hunting, I saw a gazillion "For Sale" signs, but now that I own a house I only see "Yard Sale" signs).

Already, singing has started connecting me with people in new ways.  This, I love.  I-daughter and N-son both sing in a community chorus, and I-daughter in particular has started to give me pointers on using my voice well (or more accurately, on using my voice better than before).  It's nice to see her moving into the "expert" role in our relationship here.  I have another friend who asked me to be her accountability partner in memorizing scripture; I told her that on my end, I'm going to memorize hymns, and she was delighted.   (I'm going to sing "Be Thou My Vision" to her, but not "If I only had a Brain").  Another friend wants to have me on her radio show (?!?); a theater friend of mine said that I reminded her of how much she likes doing voice exercises (I have to ask her for some of those) . . . In general, I love how singing is opening up new ways of being with people around me.

I've got a few other minor resolutions.  I didn't make it to 50 push-ups before I turned 51 so I want to try to make it to 51 push-ups this year before I turn 52.  I want to carve out 5-10 minutes of dog training each day.  I want to be more mindful of food while I'm eating it, for reasons of physical and mental health as well as overall gratitude.  I want to get out of my office and into the open air during daylight hours, in spite of all the committee reading I have to do this year.  So I've got a couple of other goals for the spring semester.

But singing daily.  That's going to be the Big New Thing in the Miser Mom lifestyle.  I'm psyched.
Posted by Miser Mom at 5:36 AM