What I did with the clothes you donated

This past week, we've taken a break from home-bound chores and schoolwork.  J-son has spent the week with his former foster mom; N-son and I have been volunteering with his church youth group at a giant place called GAiN.   GAiN is a relief organization with a giant warehouse about 8 miles from our home.  What goes on at this warehouse? People pack up food, prepare seed packs, sew things, and pack clothes and blankets. 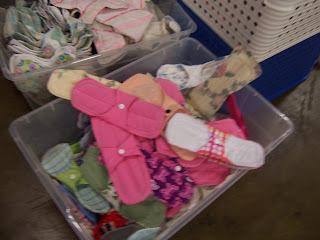 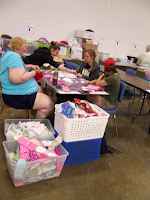 The sewing was sort of fascinating to me.  Here's one group of sewers making reusable menstrual pads.  This kind of activity is so right up my alley.  We got to hear all sorts of warm-hearted testimonials about how giving these to girls allows them to remain in school, how women who got these danced and clapped because they wouldn't have to sit all by themselves on a pail one week each month.  Good stuff.


There were other large groups of people sewing quilts to send to refugees, both for refugees in camps and for those resettled. 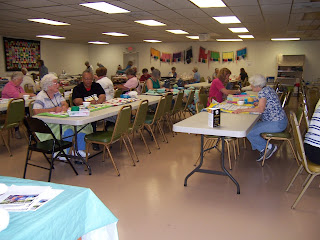 Okay, but that's not what *I* was doing.  I was working on sorting donated clothes to send overseas.  This was personally incredibly fascinating to me. I'd heard about how many, many clothes Americans discard, but I hadn't gotten to see redistribution myself.   If you're curious, too, here's what I got to see.

When we say "lots of clothes" . . . well, this is what "lots" looks like in the warehouse. There are rows and rows of these "Gaylord boxes" -- triple thick corrugated cardboard boxes, about four feet tall.  Each one is full of unsorted clothes or blankets. 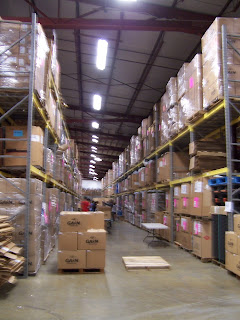 To sort the clothes and get them ready for packing, a forklift would bring four or five of these over to the prep area. How do you get the clothes out of these giant boxes?   You throw several small and enthusiastic children into the Gaylords!

These kids were totally aDORable, and they had a fantastic time. For them, it was sort of like being in a ball pit or a trampoline park, because they took off their shoes and went playing in these boxes. In addition to throwing piles of clothes into laundry baskets for easy carrying, the kids did a lot of treasure hunting. "Look what I found!" They had infectious energy. (And when their energy flagged, we'd pull them out, send them to work somewhere else, and toss a new kid into the Gaylord).

From there, the baskets of clothes went down a series of tables:  quality control, sorting, pre-folding, and packing.  In the photo below, you can see the unsorted clothes in the Gaylords on the right.  The Gaylords on the left are "special cases" of clothing, and the tables where we sorted and prepare clothes are in the middle, hard to see because they're covered with clothes, too. 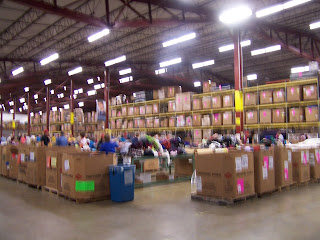 My job (with about a half-dozen other people) was "quality control".  I'd pull out some clothes for special treatment:  costumes, new clothes with tags still on them, non-clothes that had somehow made it into the clothes piles.  Those went into the Gaylords that you see in the left above, headed for (??  not sure, but probably somewhere appropriate, I hope).   I also pulled out clothes that were unsuitable for sending overseas for other reasons: any image of an American flag, or camouflage, or nasty stuff (skulls, obscenities).  Those clothes (which could make their wearers targets for attack in other countries) went into another Gaylord, I'm guessing for domestic use.

And then I checked the remaining clothing for quality.  Any missing buttons at all, and the entire garment went into the rag bin.  Zipper doesn't work?  Rag.  Any tears or tatters, including "fashionable" tatters, rag again.  (In a refugee camp, tattered clothing isn't a sign of wealth or fashion).  I checked for stains, especially under armpits and on white clothes -- rags again.

I know that when I've given clothes away, I've occasionally had the mindset of "well, someone could fix this", or "well, even though it's not perfect, surely there's someone out there who would appreciate having something to wear."  The people who trained me kept pointing at the rows and rows of giant Gaylords full of clothes:  shipping is expensive, and nobody wants to pay to send damaged clothes overseas when there are so, so, so many boxes full of nice clothes to send.

I asked some of the teenagers working at the Quality table with me what this experience made them think about their own clothes: does this make them want more clothes?  Or fewer clothes?  They all were wide-eyed at the incredible excess, and said it made them want to have fewer clothes.   We were at the anti-Mall.

The rags weren't destined for trash, by the way:  they were still going to a marginally useful future.  They'd be torn up and turned into rags, sold (one person told me) for 10¢/ton.   If you care that your donated clothes will actually be useful, it's probably worth cleaning them and fixing buttons, but if that's impossible, the clothes are still probably worth donating rather than putting in landfills.  Bea of the Zero Waste Home recommends that if you have damaged clothing you want to give away, to clearly mark it as "rags".  I don't know if that actually works, but I think from now on, I'm going to try.

What happened after Quality Control?  My fellow QC'ers and I passed the clothes along to the next table--the sorting table--where the next round of volunteers sorted clothes into adult sized, child sized, winter ("Siberian winter", we were told, not "chilly African evening winter"), and a few other categories.  They passed clothes along to either the appropriate Gaylord or to the "adult" or "children" table.

The next table of volunteers "pre-folded" each piece of clothing once lengthwise, smoothing it out.  The last table was the skilled workers; they finished folding and packing the clothes into wooden boxes about the size of a hay bale.  This folding and packing was done very carefully so as to fill the box as completely as possible.  Because from there these hay-bale-shaped boxes went . . .

. . . to the baler.  Below there's a fuzzy picture of N-son working a manual fork-lift with pallets and boxes.  He, too, loved his job.  The balers would dump the packed clothes out of the wooden boxes into the baler machine, which would tie the clothes into a bale with just two plastic strips holding it all together.  This bale was wrapped in plastic sheeting for protection, labeled with contents, and stacked.  The minimal amount of packaging helps to keep shipping costs down. 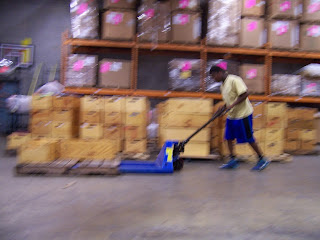 What an experience this was!  We were surrounded:  surrounded by things, surrounded by hundreds of volunteers, and constantly being reminded that somewhere outside the walls of this warehouse we were in a world with almost 20 million refugees.    So much, and yet not enough.
Posted by Miser Mom at 9:19 AM

Email ThisBlogThis!Share to TwitterShare to FacebookShare to Pinterest
Labels: clothes, Giving back, trash