Life continues to be rich and full in the Miser Family household.

My own main event this week involved getting ready for, and then recovering from, a doctor's visit this past Tuesday.  Moses, they say, almost got to look upon the face of the Lord, but it was too bright and brilliant for him to look at, and so he had to head back down the mountain.  Apparently my doctor says that I myself am beautiful on the inside, so much so that he sent me home and said I don't need to return for another five years. As a souvenir, I got a monogrammed paper bracelet with my name and birthdate to commemorate this occasion.   And to emphasize just how lovely everything is, here's a picture of me from the outside . . . . 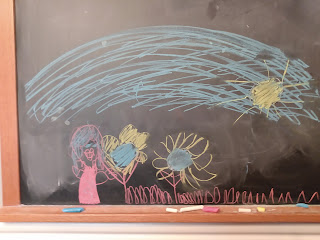 . . . in this picture of me, I am doing my favorite things, enjoying life under the bowl of a blue sky and golden sun, walking past the flowers through the flaming red grass.   (Maybe I need to bring home a few more colors of chalk).
Once I got past the doctor stuff, I started working on a math paper that includes, as one small part, a geometric concept called "ruled surfaces".  These are curvy things (like Pringles potato chips) but that are surprisingly made of straight lines that interweave in nifty ways.  This reminded me that when I was a kid, my parents built me and my sisters a fantastic club house with a jungle-gym roof that was a fabulous example of a ruled surface.  I asked my dad if he had pictures of these, and he sent me about a dozen of the project in its early construction stages. 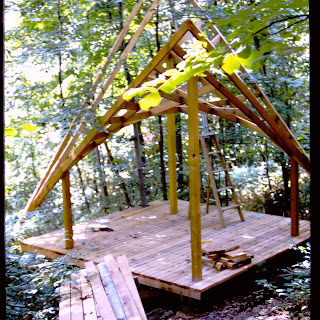 In this next photo, I think my mom looks so much like the person I grew into . . . 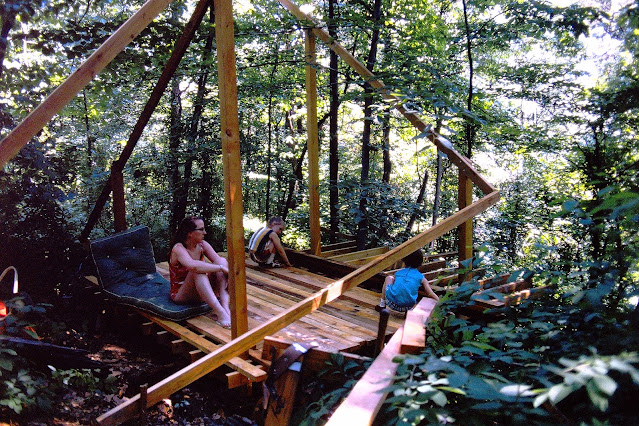 And I love the greenery in that photo.  (We had an awesome backyard as kids, really.)  Speaking of greenery, these days we're really hauling in the greens from our weekly farm share boxes.  So much that it's a challenge to figure out how to eat it all.  It's a great challenge to have! 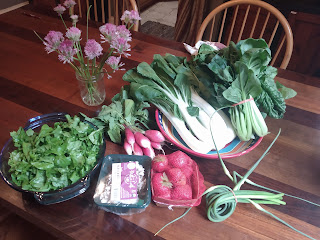 On a different challenge note, I-daughter tells me she looked over the next round of Sock Madness and is especially glad she got out when she did.  She says that the current sock has a boxy toe she doesn't like and post-knit embroidery.  So, THAT is a hassle she doesn't feel obligated to deal with.  (Me neither; I'm not doing boxy toes or sock embroidery, either.  Let's all not do it together).
My guy is doing his usual stuff:  biking up and down hills with abandon (and sometimes with his bike buddies); attending Tuesdays with Toomey protests (this week's theme: trans rights); visiting far-flung friends.  In fact, as I speak, he and N-son are taking a journey up to New York for adventures involving driving and trains.
A-child, having recently turned 6, apparently discovered right on schedule how to chop off her own hair.  (It seems to be a family tradition to do so at right about that age).  I don't have photos, but I do know that K-daughter borrowed my clippers in hopes of affecting some semblance of repair.  B-child will turn 1 very soon, and so she has another half-decade before she lops off her own hair, I figure.
And that's the news from our family, which continues to be wealthy in our adventures.  May you and yours be similarly prosperous.
Posted by Miser Mom at 3:10 PM