Picking up where my last post left off . . . we're no longer doing "allowance" in my home, we're paying the boys to recognize problems and solve them.

A bit of a set-up for this: my sons are 16 and 17, and they're starting to get jobs outside the home.  They've always done chores around the house -- N-son put his own laundry down the laundry chute even before he could talk, and he helped empty the dishwasher (putting away silverware) by the time he was 2.  Nowadays the boys are in charge of vacuuming, feeding the dog, making dinner once a week, cleaning bathrooms, mowing the lawn, and more.  We've worked hard to teach them how to be helpful, and somehow, happily, all that work we did getting them to work . . . it worked.

But if the boys are good at doing everything we ask them to do, what they're not good at is doing what we don't ask them to do.  That is, most tasks around the home are sort of invisible to the boys, until we point the tasks out.  The lawn getting long?  It'll get longer and longer until one of the parents makes noise.  Dog hair and food all over the dining room rug?  Science experiments will spontaneously get underway in the carpet, unless a parent directly mandates that the vacuum cleaner make an appearance.

I have a friend who works for our college's Facilities and Operations department, who supervises a bunch of college students who are summer workers.  He tells me they're like my sons: he calls these students "work amplifiers".  He says, "If I'm doing work and they're with me, then work gets done about 60% faster.   They amplify the amount of work I get done. But once they're out of my sight, they sit on their butts and do nothing, because they have no idea what they're supposed to do.   I have to spell everything out for them, even if I already explained it the day before."

This is not what I want for my sons.  I'm ready for an alternative.

My friend TL has been reading a book on raising kids who are financially not-spoiled, and she liked it so much she decided to have a book group discussion about it.  One of the short digressions in the book led me to a blog post by a dad named Jake Johnson who decided to pay his son to be an entrepreneur.   The post, which he wrote in 2013, went viral -- there's a retrospective in the New York Times at this link.

I'm not a fan of the title "entrepreneur" -- actually, I think it's that I am not a fan of nouns and titles in general.  But I loved the verbs he used:  he wrote,


In our house, you get paid for recognizing a problem and proposing a solution. I've taught Liam that if he wants to make money, he has to pay attention to the world around him, identify a problem that needs fixing, and propose a solution.  We then negotiate a payment.

What great verbs.  Recognize.  Pay attention.  Identify.  Propose.  Negotiate. These are great ways to navigate the world.  I want to turn my sons' heads in this direction.

One of the dangers of any system of monetary rewards I use is that my rewards tend to be so low that other people thwart my system.  My husband, especially, is prone to impetuously throw money at the boys because . . . well, because they don't have much money.  But fortunately, this system seems to work well through my husband's lenses, too.  If the boys are running low on cash and they've been sitting on the couch all day, surfing their phones, . . . well, there is money hanging from the branches of the bushes that need to be trimmed, money growing out of the ground with the weeds that need to be pulled, money sliming up the walls of the hallway that could use a good scrubbing.  All the boys have to do is put down their phones, open their eyes, and grease up their elbows.

So two weeks ago, we sat down with our boys and told them the allowance journal days are over, for now.  The boys will still have to do household chores, and they still won't get paid for regular household work.  But if they notice a problem area in the house and suggest/follow-through on fixing it, and if they do it before I make them do it, then they get paid.  On the other hand, if that problem bugs me enough that I make the boys do it before they notice it gets bad, they do it for free.  Being proactive pays.

The flip side, I told them, is that from now on they pay for all their clothes themselves, plus sports and musical equipment.  It's time for them to start learning that side of the earn/spend financial world.

I have a giant list of things that will eventually need to get fixed and/or cleaned up around the house, and I used this list as a "for example" spreadsheet to get the boys started.  They both asked for, and got, photocopies of this list.  I also suggested that, all other things being equal, a rule of thumb would be to think of an hour of work as being roughly $5 (that's like minimum wage, minus taxes, rounded off to make it easy to calculate).  Tasks that require more skill would likely get more money.

Then I off-handedly suggested something that turned out to be the golden halo of awesomeness, as far as the boys were concerned.  I said, "you don't have to negotiate for money.  You could offer to do a chore in exchange for getting to keep your phone for a night or two instead."  Little did I expect that that would be the biggest draw.  For example, J-son took out a big bush from the front yard that needed to come down; we agreed that in exchange, I'd give him $5 and two nights of having the phone in his room, subject to good behavior.


[Our long-standing practice with these phone-addicted boys is that they turn in their phones to us before bedtime, and we charge the phones overnight.  This has worked incredibly well at making sure the phones aren't lost, broken, or being used for all-night video gaming.  But the boys -- particularly J-son -- would like to be able to use the phone for music and as a wake-up alarm.  We're cautiously experimenting with allowing this.]


This is clearly going to be a long-term endeavor.  Changing my sons' mindsets isn't happening overnight, in the same way that teaching them to do chores in the first place took more effort (initially) than doing it myself.  I'm doing a bunch of suggesting problems to them that I think they ought to recognize.  So far, I'm not finding myself going broke because of all the money projects the boys are throwing themselves into.

Here's what they've done so far in the two weeks we've been in this system: 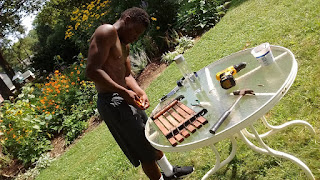 All of these are jobs that I proposed they ought to recognize, not ones that they recognized on their own, but it's a start.  I think I'm down $16 and four nights of phone use -- compared to $20 of allowance money that I would have forked over for the same time period.  And I'm up a bunch of help around the house.  So selfishly, I'm ahead.  But I'm looking forward to the days when the boys catch fire with this system, and start genuinely seeking out ways to be a help, even before I ask.  A year or so from now, I'll let you know how it goes.