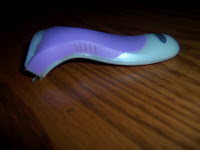 Behold my old razor.  I bought it years ago, thinking to myself that it was an environmentally friendly and also cost-saving choice, because instead of buying (and eventually tossing) a whole new razor, I was just tossing the little plastic heads.

But those little plastic heads?  They're (a) expensive and (b) an endangered species.  My particular brand of razor  is getting to be so old that the blades aren't on the shelves of the drugstore near me.  And faced with the idea of getting a new razor handle anyway, I finally went retro and got this: 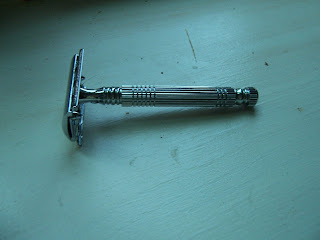 To be more specific, I got that razor and 25 double-edged razor blades.  It took me a long time to decide to do this.  Here is some of the back-and-forth I went through.

First, it's just hard to find these babies in a regular store (especially when you spend as little time in regular stores as I do).  The drug stores near me really seem to have become museums of plastic -- that's all I see when I wander in to get my boys' meds.  If the thing the store is selling isn't plastic, then it comes wrapped in plastic before it can be sold.  So metal razors and plain razor blades aren't invited to the drug store party.

Enter Amazon.  I was worried about lots of packaging because of the mail-order aspect of this purchase, but considering how thoroughly store-bought razors and their blades are wrapped in layers of cardboard and death-grip plastic containers, I figure that I actually came out ahead in the trash arena on this one.  The razor itself came in a small cardboard-and-plastic container that I tossed.  The razor and blades, together with the mailing materials, are below:
Next issue:  cost.  Because, of course, a good solid metal razor is going to soak a body for more than a plastic razor, right?  Actually, again:  the opposite.  At the same time my husband was buying replacement blades for his own razor (10 blades = $30), I got my razor and my 25 blades for $13.  For the money factor alone, I should have done this long, long ago.

What else worried me?  Those darned razor blades themselves.  I balked at the idea of handling them, not only switching them in and out, but also disposing of them safely.  I'm a little hinky about sharp things.   So here's a pictorial on how easy it is to change the blades.


First, unscrew the handle from the head by just turning the handle. 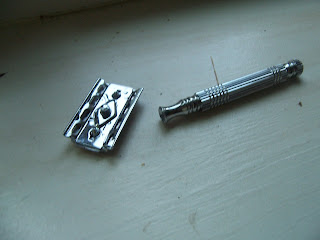 Second, the head separates into three pieces: a curved protective piece with a center knob, the blade itself, and the flat plate that hold it together.  They basically just fall apart once you unscrew the handle. 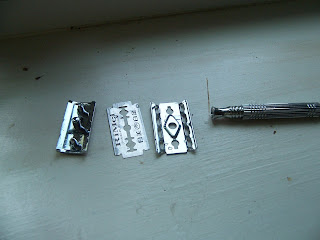 Then get a new blade and put the pieces back together.  That center knob sort of aligns everything in the right place without much fussing on my own part.  Screw the handle back on, and, done!

And disposal?  I've commandeered a paper coffee cup that my husband brought home and marked it in bold letters:  "used razor blades".  I'll add that to the box of scrap metal that we give to Paul D. (He collects and redeems scrap metal to bring in extra money for him and his ailing wife).

Finally, the question that many people would put first:  how well does this actually work?  I saved this question for last because that's such a personal preference.  For me, I'll say "so far so good".  I'm not a picky person in this arena, and I haven't really noticed any difference.  My husband would have a different opinion: he remembers his metal razor days as the reason he decided to grow a beard instead.  Most of the reviews of this razor I read online were pleased as punch, but a few were unhappy.  Given the price, I'd say it's worth trying it out for yourself if you're curious.
Posted by Miser Mom at 3:14 AM