Sunday night was a real zoo in the house.  My kids were animals (especially if you believe that you are what you eat).  Hungry as a bear.  Real pigs.  Why?  We were celebrating . . . it was the Zoo Dinner!

The beginning of the event was decorating the table with photos of animals from various calendars we've gotten.  The chairs face backwards (read on to find out why . . . ) 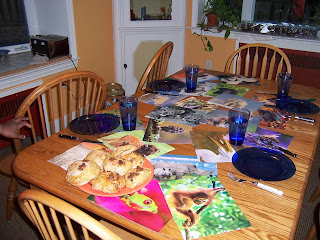 The menu included lion heads (hot pockets stuffed with hamburger, seasoned with taco sauce, barbecue sauce, and salsa).  Sort of mangled lion heads, actually.  [If your head had been in the oven for a half hour, it wouldn't look that great, either!]
Also on the menu:  pesto turtles.  These, like the lions, puffed a bit out of shape as they cooked . . .
After making all these animalitos, I got tired of making little pockets. I gave up and made a boa constrictor which had swallowed up, in one gulp, the remaining stuffing supplies. 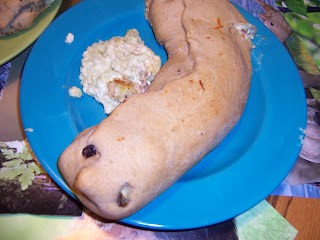 In spite of my substandard sculpture techniques, feeding time at the zoo was an animated event.  All the animals in their cages roared to be fed . . .

After everything was done, we hosed down the cages, closed down the exhibits, and put the carnivores back in their dens for the evening.  Grrrr . . .  prrrr . . . zzzz.

*****
Epilogue:
The boa constrictor has quickly became a family favorite.  Both N-son and K-daughter begged for the recipe.  I realized we could easily make several at once and freeze the rest, minimizing hands-on time.  So in case you're interested, here's the recipe:


This should be enough for two snakes, so divide the dough into two pieces.  Roll out each, so it looks like a pizza.   Add the other ingredients in long lines.  Roll this baby up, parallel to those lines.  Add raisins for eyes.  Grease the pan, and bake at 350° for 40 minutes.