I am the Amelia Bedelia of gardening.  When I moved here to Lancaster, the only thing even remotely like a garden I'd seen was a lawn.  And bushes.  And my only job for those had been to cut them.  So when I started trying to garden I made some memorable mistakes.  Many.  Here are some of the many mistakes I've made. 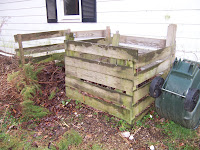 Compost is a sacrament of gardening.  Compost adds texture and vitamins and a gazillion other good things to the soil.  Even though I killed plants right and left, I could make compost.  I loved putting stuff in a pile and letting it rot.  I was the queen of compost.  My three-year-old daughter told my friends, "My mom has a PhD AND a compost pile!"


1.  When people say you can make a compost bin out of wooden fencing, do not use an actual fence.  It will rot, too. The neighbors will not be happy.  Also, do not use one edge of the house.  Or the garage, either.

I got poinsettias for Christmas one year.  The tag on my pot said that they do not like direct sun.  So I put them in an unused fireplace, far away from the sun.  They died.  (And became compost).


2.  Apparently, poinsettias do indeed like direct sun.  Certainly, "not liking direct sun" doesn't mean "liking total darkness".  Green things need sunlight.  I haven't always figured out how much, but 0 is not enough.

3.  Similarly, "do not overwater" does not actually mean, "Do not water for several months."  'Nuff said.


4.  When people say "put mulch on the garden", what they really mean is put mulch AROUND the plants, not ON the plants.  If you bury your flowers under mulch, they will die.   I wish people would say what they mean.

After this, I met up with Joe, a friend who was mulching his many Day Lilies, and he offered some of them to me.  We were chatting about that whole "around" versus "on" thing, when Joe's wife came out and saw us.  "Why don't you offer her some Black-Eyed Susans?" she asked.  "No one can kill Black-Eyed Susans".  Joe just shook his head and said, "Our friend is a woman of many talents".


5.  Day lilies are hardy.  If you leave them lying in a laundry basket outdoors for about two weeks or so, and then decide to actually plant them, only some of them will die.  The ones that live will take over your yard after a few years.

The Day lilies were a turning point in my garden.  After I planted those, I started getting better at not-killing the plants.

My feeble tomato attempts produced 5 or 6 brave tomatoes a year, until the year that I moved the plants into a tiny, sunny corner of the yard . . . when they took off.   I do recall people saying sun mattered, now that you think of it.