Taking a walk on trash day

I am a person who admires dumpster divers and "freegans" (people who try to get all their stuff for free).  My impression is that the lifestyle is best suited to single, city dwellers, and not to suburban mothers-of-many.  There aren't a lot of dumpsters near me, really.

But going for walks or runs around my own neighborhood on trash morning can be very (ahem) rewarding.  I don't dig through my neighbors' trash cans, but I've found some really nice large items next to their trash cans that have been very useful.  Here's a partial list:

I have a new, honorary daughter who moved into my home last May and who has sort of been watching me wide-eyed.  It was a real kick, then, to get a phone call from her one day while she was walking around down-town:  there was a set of storage shelves by the curb with some other trash cans; wasn't I looking for something like that? 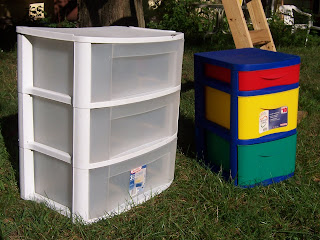 The shelves had been left with a pile of trash outside of an apartment of someone who seemed to be moving away and doing both cleaning and purging.  A quick outdoor cleaning with soap and water, and the shelves were as good as new.  Now they're up in my younger son's bedroom.
Posted by Miser Mom at 3:41 AM