You've probably used "to do" lists as a way to keep from forgetting important tasks.  You've probably used shopping lists as a way of controlling your spending (even if it's just to avoid making several trips to the grocery store for that item you keep forgetting to buy).  Yesterday, I wrote about how making lists helps me control desk clutter.  All these reasons show why lists are important tools for a frugal person.

But lists can be so much more powerful than that.

Here's why.  Barry Schwartz, a sociologist at Swathmore College, has written a bunch of books and articles on something he calls "The Paradox of Choice". He says that, although we believe that more choices are better, the sheer enormity of the choices we face overwhelm us.  He gives example after example of how people who are given more choices make worse decisions than people who are given almost no choices.

Think about this in your own life:  you come into work on a day when there's no one thing that's extremely urgent, but there are lots of little jobs that are hanging over you.  Every time you think about starting one task, you worry about whether that's the right thing to work on first . . . so you clean your desk and sharpen your pencils and play computer games until something suddenly becomes urgent.  The day goes by and there's just as much to do as when you started.

Then you come home from work, open the freezer, and see a bunch of frozen globs.  What to have for dinner?  You are so exhausted from work that you can't make up your mind, so you decide to go out to a restaurant.

If there had been one urgent job, one massive deadline approaching, there's no question about what you would have done at work.  If there were only one or two clearly labeled containers in the freezer, you might have grabbed one of those for dinner instead of spending money and time at a restaurant.   But the number of choices itself made a good choice hard to come by.

Another example:  people who have only one or two outfits to wear do not stand in front of the closet for 15 minutes wondering what to wear that day. They don't try on several outfits before deciding on the right clothes to wear.

So, you can either get rid of stuff (your clothes, your food, and the tasks at your work), or you can figure out a way to overcome the paralysis of too-many-choices.  The power of a list is that you can get all of that messy stuff in front of you in a neat format, and you can organize it and prioritize it.  You can decide ONCE, and then follow your list.

Am I saying that I'm anal enough to make prioritized lists of the food in my freezer?  Well, actually, yes. I don't do it all year round, but as we got close to summer this year I wanted to clear out all the food I'd prepared and stored up the previous fall.  I really didn't want to keep mystery food in the freezer for several years.  So I did an inventory of the freezer, and then I reorganized the list into weekly menus, listing about three meals per week.  (I knew we'd start getting fresh vegetables from our CSA--Community Supported Agriculture--plus a few invitations to friends' houses, to fill out the other meals). 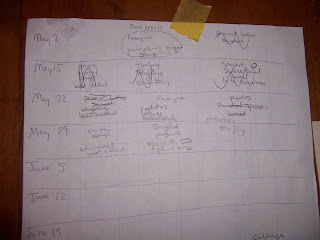 A small amount of the food in my freezer was just not very yummy -- the squash ginger soup didn't magically get better with time, unfortunately.  The weekly list gave me the impetus to finally toss that food -- its time had come and gone.  But most of the food I'd stored away (stuffed peppers, pesto) was like finding buried treasure.  Mmm, mmm.

The point of this post is not to say that we need to write down lists of everything we do.  But if you're dreading facing the same decision over and over again, a list might be a good way to help you decide on a plan once, and save your brain power for more important things.
Posted by Miser Mom at 3:50 AM